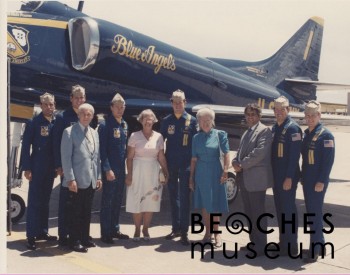 Johnny Woodhouse interviewed Roy Voris, the founder of the Blue Angels, prior to the 2003 Sea & Sky Spectacular at Jacksonville Beach. Voris died in 2005.

The Blue Angels, the Navy’s premier flight demonstration squadron, practiced in a cloud of secrecy prior to its first public performance at NAS Jacksonville in 1946. Shunning populated areas such as the Beaches, the unit, then made up of four planes, flew over densely wooded areas west of Jacksonville, performing their “V” and “Echelon” formations in carrier-based Hellcat fighters made famous in World War II.

“The first instruction I got when I formed the Blues was to stay out of public view,” recalled retired Navy captain Roy Voris, the unit’s founder. “It was better to stay out of sight if we had a bad accident. We were a separate unit, not yet a command.”

Voris, who shot down eight enemy planes in WWII and was awarded three Distinguished Flying Crosses, said the Blue Angels were formed primarily to renew interest in carrier aviation in post-war America. “It was done to get the Navy visible again,” he added.

“They said there was only one candidate to lead the unit, and I was it. I selected the Hellcat because it was an honest machine and very stable. My concept of the show was to get it on, get it up and get it down in 15 minutes.”

Voris, who died in 2005 at the age of 85, had a hand in nearly everything about the fledgling Jacksonville-based squadron, from picking the pilots and ground crew to devising the dangerous flying sequences. Tall for an aviator, Voris had flown combat missions off two different carriers during WWII, serving as flight operations officer on one of the Navy’s most decorated carrier squadrons, “The Fighting 32nd.”

“Almost everybody was an ace,” he recounted. “It was either be an ace, or be killed. We stair-stepped through the Pacific flying day fighters equipped with .50-caliber machine guns. We saw a lot of action.”

After the war, he was assigned to teach fighter tactics at NAS Daytona Beach. In early 1946, he was reassigned to NAS Jacksonville as chief flight instructor and tapped to lead the Navy’s new “flight exhibition team.” Voris choose pilots he knew and trusted, including his former squadron mate on the USS Enterprise, Lt. Maurice “Wick” Wickendoll.

In 1946, a contest was held to name the unit. Among the suggestions: “Blue Bachelors” and “Blue Lancers.” Then Wickendoll showed Voris an advertisement for a nightclub in New York called the “Blue Angel,” the pair knew they had found their handle.

Voris commanded the Blue Angels from 1946 to 1947 and through their transition into the faster Grumman Bearcat. He was tapped to lead the Blues again in 1951, after the unit was disbanded for a short time during the Korean War. As officer in charge, he demanded that all his pilots be bachelors. But during his second stint with the Blues, Voris broke his own cardinal rule – he got married when he was home on leave in Santa Cruz, Calif.

After retiring from the Navy in 1963, Voris became a consultant for Grumman Corp. and later worked in NASA’s Office of Industry Affairs. An air terminal at NAS Jacksonville is named in his honor. While today’s Blue Angels pilot supersonic jets, they still fly in tight formations, as close as a foot apart.

“My ability and confidence to fly in tight formations came from my war experiences,” said Voris, who started the Blue Angels when he was 27 years old. “Flying close quarters is the mark of the Blues.” 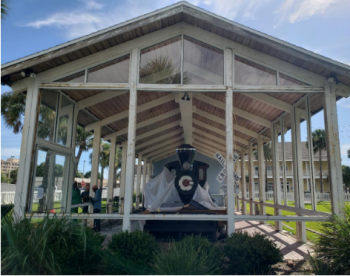 If you’ve been by the Beaches Museum recently you will see a LOT of work going on with the building that houses the 1911 Cummer & Sons Locomotive! Known as the Train Enclosure, the building protects the locomotive and is always busy with visitors, field trips, birthday parties and more.

Do you want to be a part of the effort to repair the Train Enclosure? Donors of $20 or more to the project will have their name listed on a permanent sign that will be hung inside the Train Enclosure when the project is complete! List your name or that of someone who loves the train and they will be able to see it for years to come. 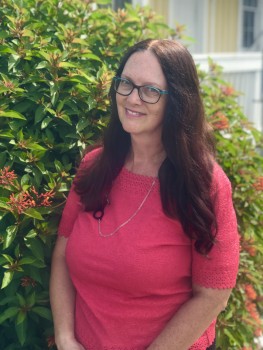 The Beaches Museum has hired Karen Lamoree as its new Archives & Collections Manager. Lamoree is responsible for the preservation, organization, and accessibility of the Beaches Museum’s archival material and special collections.
Lamoree earned a Bachelor of Arts in public administration with minors in economics and history from Clark University and a Master of Science in information science from State University of New York, Albany. She has held archivist positions at Brown University and the Wisconsin Historical Society. She has authored numerous articles published in Archival Issues and Rhode Island Jewish Historical Notes.
“We are very excited to bring Karen’s experience and expertise to the Museum” says Executive Director Chris Hoffman. “We expect that she will not only hit the ground running in the care and protection of our community’s history, but also that she will work to expand awareness and access to all that we have to offer.”