This 1903 post office was the first stand-alone post office in Pablo Beach. It was originally located two blocks east and one block north. Mrs. Celenia Dickerson was the postmaster in this building. The building was used from 1903-1909, and by 1917 it had been moved to Second Street South and became part of a home. In 1986 Eagle Scout Scott Chandler and his crew helped prepare the building for its move to Pablo Historical Park.

The 25 ton steam locomotive was built by H. K. Porter and Company of Pittsburgh, Pennsylvania in March 1911 as Serial Number 4845. It was manufactured for the W.W. Cummer & Sons Lumber Company of Dade City, Florida and operated near Lacoochee, Florida. It was used to haul pine and cypress logs in Pasco County, near Miami. The tools on the back of the tendercar are track and logging tools.

It has a 2-6-0 wheel configuration indicating two wheels in the front, six under the boiler, and none under the cab. This locomotive is typical of a steam locomotive of the early 1900s.

It was donated to the Beaches Museum in 1981 by the City of St. Augustine where it had been on display for 21 years. It was moved here from St. Augustine in 1982, and is now displayed near the original location of the Jacksonville and Atlantic Railroad tracks, which became the Florida East Coast Railway.

A passenger train would have had a similar locomotive and tender. The baggage cart in the back of the station is filled with luggage from the era of the train. 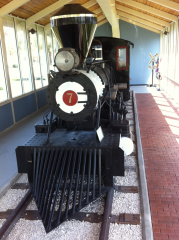 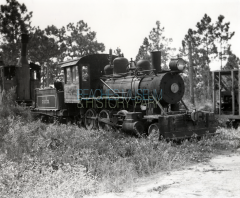 Notice the original smokestack; also the pilot is not mounted in this photo.

This circa 1900 building stood in Mayport as the terminus point for the Florida East Coast Railway spur line to Mayport. Mr. Henry Flagler bought the Jacksonville and Atlantic Railway, expanded it to standard gauge and extended it to Mayport.

The spur line was in operation from 1900 to 1932. The upper portion of the building is the freight room. The double door on the front allowed for freight to be off-loaded directly into the room with double doors on the back for pick-up. The lower portion of the depot housed the stationmaster’s office and waiting room.

After the rail line ceased operation to Mayport this building was used as part of a home and a bar and restaurant. It was moved from the port area in Mayport to the end of Pearl Street, and then to the Beaches Museum in 1981. 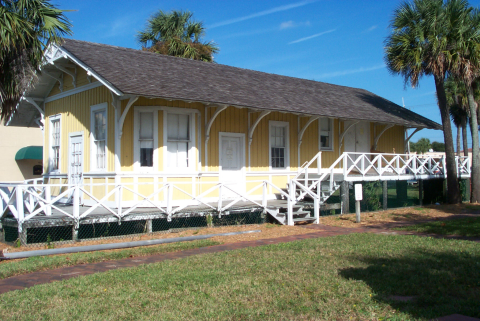 The Florida East Coast Railway (FEC) constructed this 1 ½ story, wood frame structure in 1900 at Jacksonville Beach (then known as Pablo Beach) as a residence for their section foreman. The house was originally located on the northwest corner of Railroad Avenue (now Beach Boulevard) and 6th Street North (one-block west of its present location).

From 1915-1922, Hershel Smith, the Section Foreman whose history is best known, lived in the house with his wife Ethel and their two daughters, Lynn, and Jane.

The two bedroom, living room, dining room, kitchen and attic floor plan was used by the Florida East Coast Railway Co. from Northeast Florida to Key West. All their structures were painted colonial yellow, including #93. This house had no indoor plumbing or electricity while used by the FEC. Water was drawn from a pitcher pump in the back yard (see sample pump in the back hall). A stove in the front room and probably one in the dining room heated the house. Cooking was done on a wood stove in the kitchen.

In 1933, after the railroad was no longer in service to the beach, William T. Brown purchased the house at auction for $60. Mr. Brown moved the structure to First Street South in Jacksonville Beach. Plumbing and electricity were installed after 1933 (when the house was no longer used by the Florida East Coast Railway). In December 1978, Mr. Brown offered the house to the Beaches Area Historical Society. He documented that the house was Florida East Coast Foreman House #93 and that it was constructed ca. 1900. It was moved to Pablo History Park in 1979.

None of the furnishings are original to the house or the families that lived there. 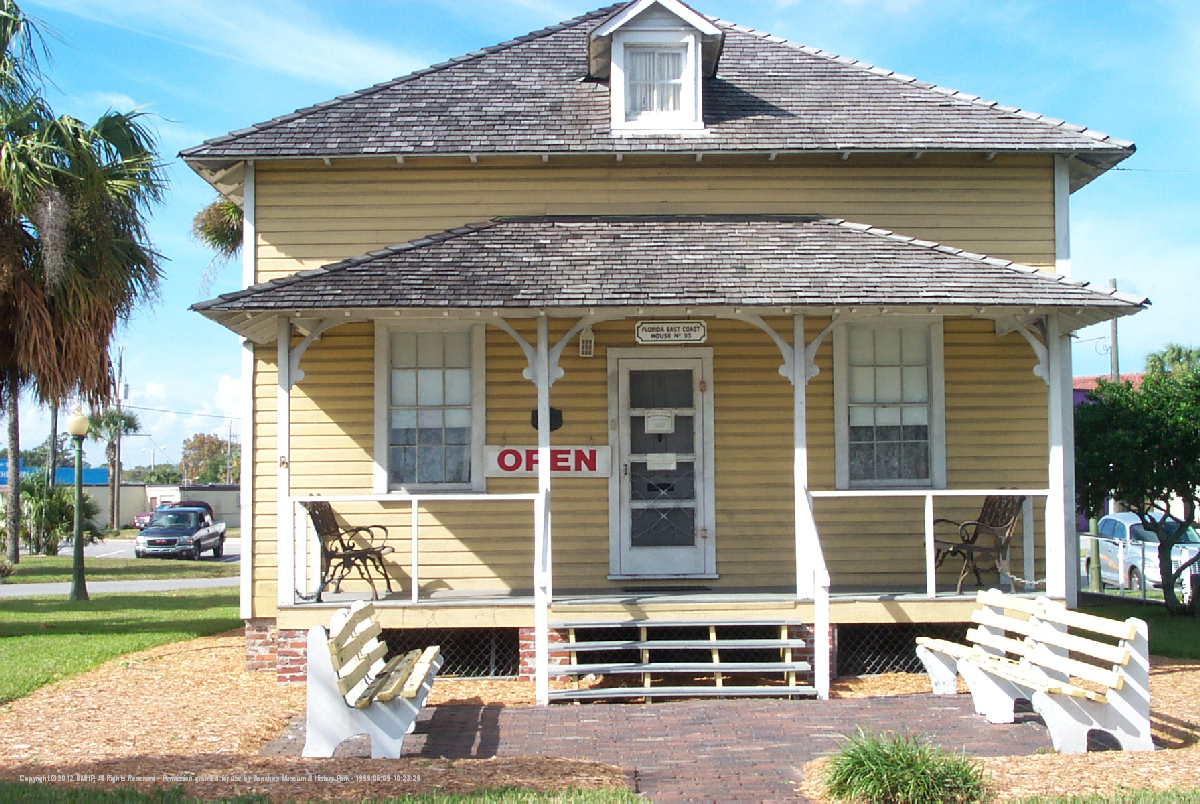 Built in 1873 on Twenty Mile in Palm Valley, the Oesterreicher-McCormick Cabin is one of the area’s oldest examples of Florida Cracker architecture.  Under threat of destruction to make way for a development, the Cabin was identified by the Beaches Museum not only for its historic significance, but for its potential as a support building within the History Park.

The cabin was donated to the Museum and a very successful capital campaign to provide for restoration ensued.  Great care was taken to preserve as much of the craftsmanship and original features of the Cabin as possible while bring it up to modern-day building codes and requirements.

Opened to visitors in November, 2016, the Cabin has proved to be not only an ADA compliant bathroom and gathering area, but also a fascinating glimpse in to pioneer life in Florida for visitors, school groups, and the community. 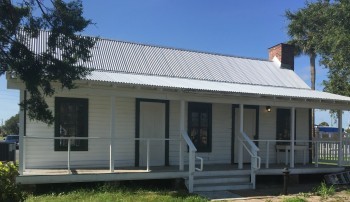 Visit the Heritage Garden to see what is growing, flowering, being planted, and being harvested.

We have moved the St. Paul’s By-the-Sea/Beaches Chapel, one of our Oldest Historical Structures on the Beaches, to the Beaches Museum. The chapel was moved on June 17, 2012.

The chapel is now available for events. We have had weddings and other meetings in the chapel. If you are interested in renting the chapel for a Jacksonville Beach Wedding, you may contact us for the full details.

The chapel has a rich story at the beaches. The location at the history park is its fourth location at the beaches, and its fourth “official” move. The chapel was moved twice while at its second home (once to turn it 90 degrees). The chapel started out at Second Avenue and Second Street South when it was built in 1887 in Pablo Beach (Jacksonville Beach now). In 1952, it was moved to 11th Avenue North and Fifth Street in Jacksonville Beach (previously Pablo Beach). In 1960, it was turned to face Patricia Lane. In 1970, the chapel was moved to 610 Florida Boulevard in Neptune Beach. Beaches Chapel built up around the small building, and finally the chapel was moved June 17, 2012 to the Beaches Museum.