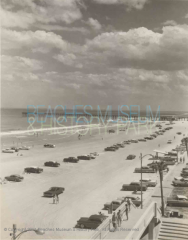 Ruby, Pablo Beach, or Jacksonville Beach – no matter what it has been called, this special place has been the hub of Beaches life since the early days of the 1880s. This was the beach for fun and festivities, of the railroad, and the beach that set the tone for the development of the other beaches. This is the Famous Beach.

In true Florida style, Jacksonville Beach began here with the dream of development: to turn this “oak scrub beach” into the tourist and entertainment hub of the Atlantic Coast. Beginning as a tent city for a few hardy souls, Jacksonville Beach has become a business, resort and residential community able to thrive on change and recognize adversity as an opportunity. 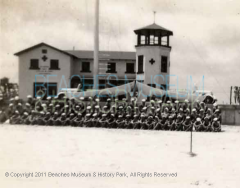 In 1884, William and Eleanor Scull set up their tent home at the beach to help survey the area for the coming railroad. Eleanor opened the first general store and post office on the beach, thereby bestowing the name Ruby on the area. The little community grew. In 1899, Henry Flagler purchased the faltering Jacksonville & Atlantic Railroad, converting it to regular gauge and spearheading the development of the area. Some 20 years later, the boardwalk had become a major attraction and the Beaches population grew. Racing, aviation, dancing, eating and frolicking in the waves became hallmarks of Jacksonville Beach! 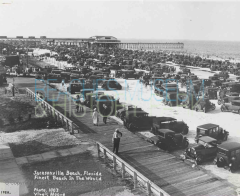 Today, the sense of community is very strong here as Jacksonville Beach experiences growing pains. The city is growing vertically with old landmarks being replaced by modern cement “sand castles” and an influx of new residents. The atmosphere is still warm and friendly as a small town would be. The Jacksonville Beach welcome is still strong after some 110 years. Old friend or new friend, we are glad you are here.