This article was adapted by Archives & Collections Manager, Sarah Jackson, from the permanent exhibit “Waiting for the Train” and the 2017 exhibit “Atlantic Beach: From the Continental to a Coastal Community.”

Henry Flagler (1830-1913) lived “The American Dream.” He was born in Hopewell, New York and later moved to Bellevue, Ohio where he found work at the L. G. Harkness & Company store. 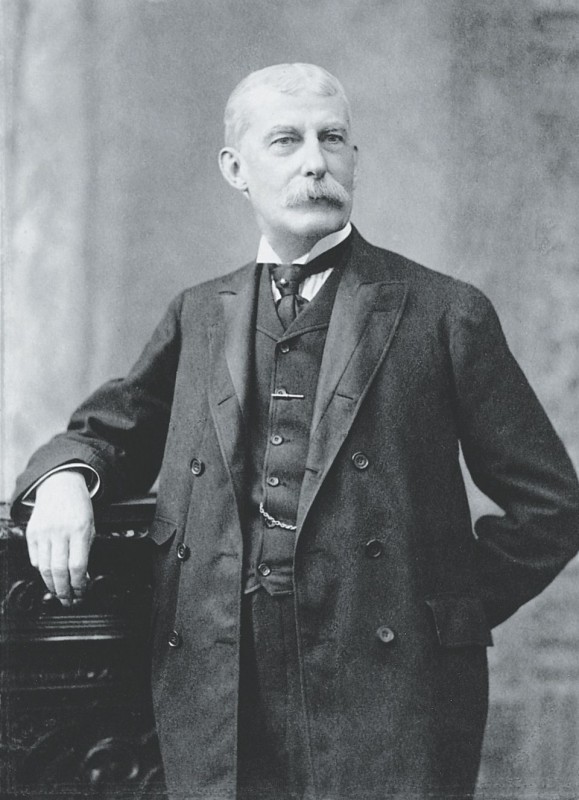 During his time in Ohio, Flagler organized several companies in the grain and salt industries before joining John D. Rockefeller, a fellow grain trader, and Samuel Andrews to found Standard Oil, a petroleum refinery. Soon, Standard Oil was doing one-tenth of all petroleum business in the United States and went on to become the largest and most profitable corporation in the world at its peak. Flagler’s involvement with Standard Oil steadily diminished after 1882, but he remained vice president until 1908.

In 1853, Flagler married Mary Harkness, the daughter of Lamon Harkness – owner of the general store where he was formerly employed.  Mary’s health was poor throughout her life, although she and Henry had three children: Jenny Louise, Carrie, and Harry Harkness.

Flagler first came to Florida in 1878 when he and Mary came to spend the winter in Jacksonville, Florida in the hopes that Mary’s health would improve. Although she never regained her health and died in 1881, Flagler recognized potential for growth and tourism in Florida and went on to devote most of his remaining years to developing the area. Flagler was especially taken with St. Augustine after an 1883 trip to the area with his second wife, Ida Alice. He returned to St. Augustine within two years to commence construction on the Ponce de Leon and purchase the Jacksonville, St. Augustine, & Halifax Railroad. From these projects, Flagler established the Florida East Coast Railway.

Over the next several years, Flagler continued to purchase smaller, local railroads along the east coast of Florida and connect them to create a railway system unlike any Florida had yet seen, which would span from Jacksonville down into Key West. Other hotels were constructed along the line after the Ponce de Leon, creating a string of hotels that became the Florida East Coast Hotel Company. Around 1899, Flagler set his sights back toward the Jacksonville area and implemented this same pattern at the Beaches. 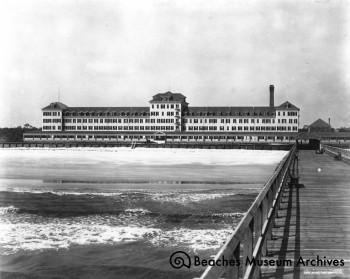 The main objective with this new branch was to reach the docks at Mayport along the St. Johns River, which soon also became home to the company’s coal wharf. The coal was needed to fuel Flagler’s growing railway and hotels. The Jacksonville and Atlantic Railway ran from downtown Jacksonville toward Pablo Beach (now Jacksonville Beach). The Jacksonville, Mayport & Pablo Railway operated from the Mayport Village docks over to Burnside Beach on the oceanfront. Burnside Beach was a short-lived luxury resort complex that was built in conjunction with the JM&P Railway, but is now known as part of the land where Naval Station Mayport resides. These two railways were purchased by the FEC and connected along the oceanfront by 1900 to create the Mayport Branch of the FEC Railway. Another FEC Hotel was opened along this line in Atlantic Beach – the Continental Hotel. 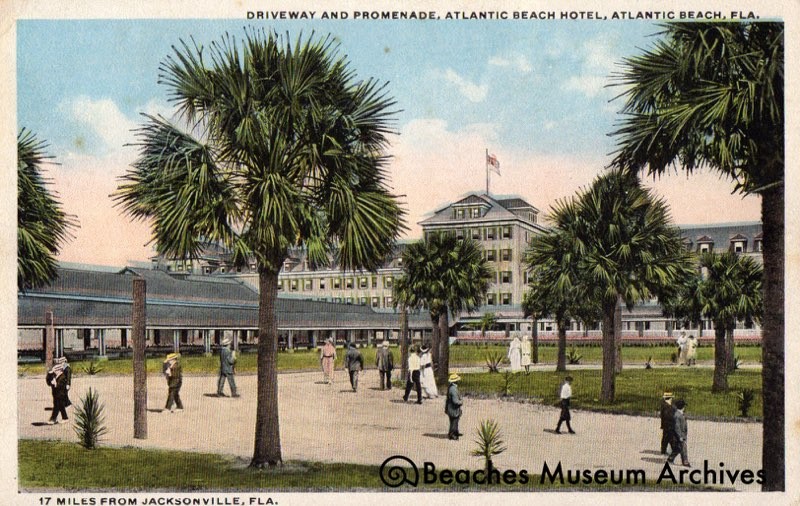 Postcard depicting the Continental Hotel (after it was renamed to the Atlantic Beach Hotel) as viewed from the railway.

The Continental opened in June of 1901. While it still featured luxury accommodations like Flagler’s other Florida resorts, it was simpler in design than hotels like the Ponce de Leon. The hotel featured its own golf course, a detached veranda that wrapped around the hotel for lounging, an 800 foot ocean pier – the Atlantic Beach Pier – for fishing, picturesque drives around the area, and automobiling and racing along the shore.

Stretching along the oceanfront at 447 feet long and 47 feet wide, the wooden hotel provided a grand and palatial figure at the Atlantic Beach seashore. The building was yellow – a specific shade used by the FEC – with green shutters, accommodations for over 200 people, and a dining room that could seat 350 people.

In advertisements for the hotel, the building was described as having an architectural design which was “perfectly balanced and pleasing to the eye” with its symmetry. It was also constructed close to the railway and boasted its own train station along the Mayport Branch. 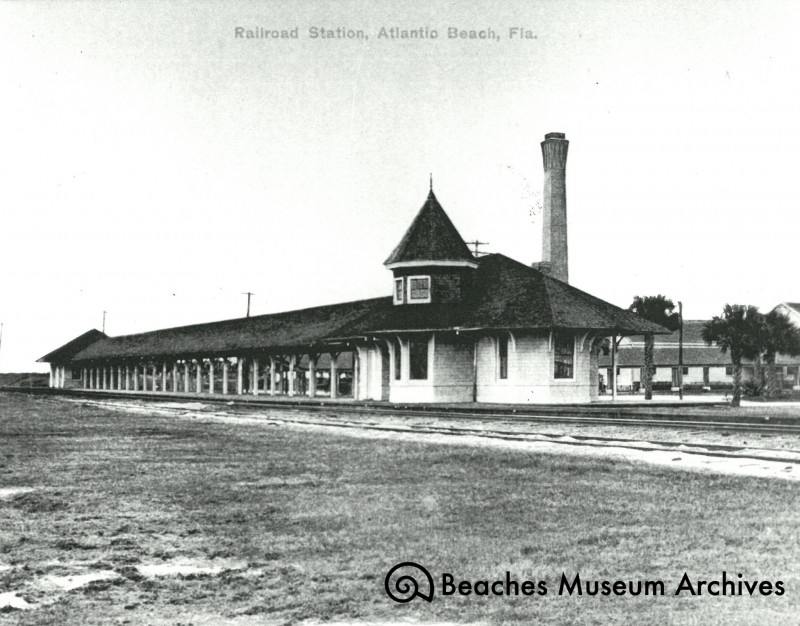 The station for the Continental Hotel, also known as the Atlantic Beach Station. 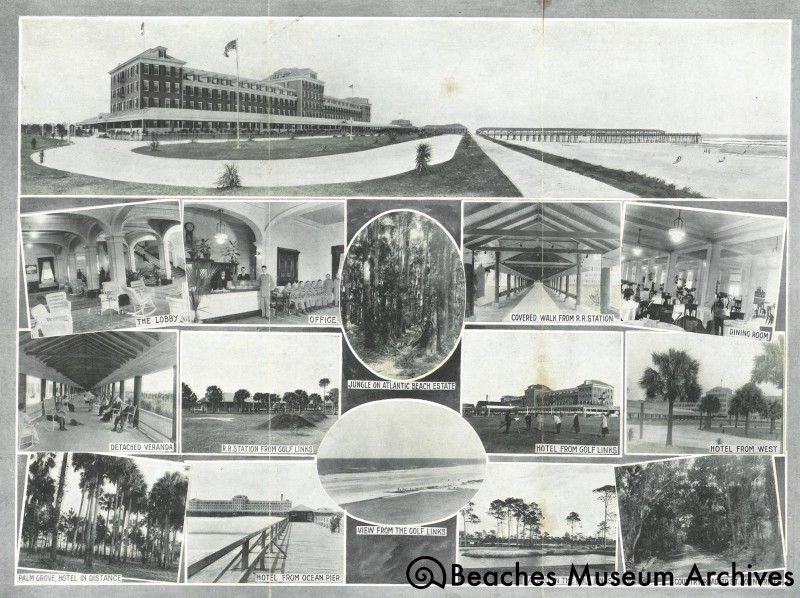 The inside of a brochure for the Continental Hotel after it was renamed to the Atlantic Beach Hotel, which depicts several scenes both inside and around the hotel.

The Mayport Branch continued to operate under the FEC well after the company had sold the hotel. Carrying passengers and cargo to and from the beaches, it remained a staple in local transportation for several years. However, by 1930, the FEC’s interest in the Mayport Branch had and local need for the railway decreased as other methods of transportation improved. Cars were already a regular sight at the beachfront, and in 1931, renovations and an electric drawbridge were completed for Atlantic Boulevard, allowing for greatly increased flow of traffic to the Beaches. The branch ceased operations in October 1932 and marked the end of an ear for the Beaches communities.

Part of a brochure for the Continental Hotel as it reopened for its 1910 season describing the amenities of the hotel and its surroundings.

Flagler never lived to see the end of the FEC in the Beaches area. In 1913, he fell at his home in Palm Beach and died on May 20. His legacy in Florida continues today both through the company and the communities that developed and expanded around the railway.