Though Pablo Beach only became an incorporated city in 1907, the community was already well on its way to becoming a popular beach destination on the Floridian coast of the Atlantic Ocean. Before 1912, however, residents and visitors to Pablo Beach, now known as Jacksonville Beach, swam in the ocean waters at their own risk. Over the years accidents occurred with inexperienced bathers, and even experienced bathers, caught in rip currents and other dangerous situations in or near the water. There were no trained officials at the beach to help bathers in distress and the closest medical facilities were miles away in Jacksonville. 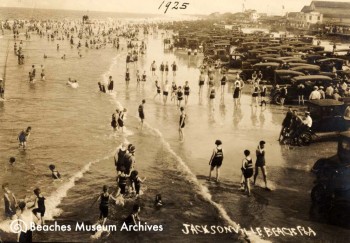 This photo shows the Jacksonville Beach beachfront filled with crowds of bathers and cars in 1925.

The United States Volunteer Life Saving Corps of Pablo Beach was founded in 1912 by Clarence H. McDonald and Dr. Lyman G. Haskell. McDonald was appointed supervisor of public recreation for Jacksonville by the city government that year. Shortly after he took up his new position, a young nurse drowned in Pablo Beach, which brought the lack of beach lifeguards and first aid to McDonald’s attention and set him on the path creating the Corps. As he began efforts to start a life saving organization, he met Dr. Haskell, the Physical Director of the Y. M. C. A. in Jacksonville at the time who had also recognized the great need for such a group and joined McDonald’s efforts. Haskell created swimming and gymnastics classes in 1912 which became the basis for future Corps training, and many of his students from these classes became the first members of the U. S. Volunteer Life Saving Corps. 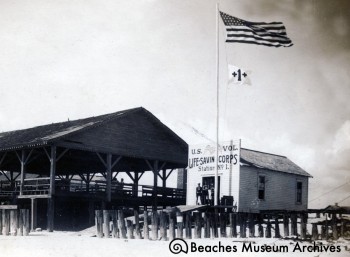 The Corps officially opened its first station, funded by the city, on April 6, 1913. This first station was a wooden structure just large enough to house one or two boats, some equipment, and a handful of men. The small building quickly became insufficient to fulfill the needs of the volunteer lifeguards, but continued to serve as their station for several years.

Less than two years after its inception, the Corps experienced a significant change. Due to the efforts of Commodore Wilbert E. Longfellow, the American Red Cross began its water safety program in 1914, and the U. S. Volunteer Life Saving Corps was chartered on April 17 of that year to become the American Red Cross Volunteer Life Saving Corps, Coast Guard Division #1. The small Pablo Beach station became known as Station #1. 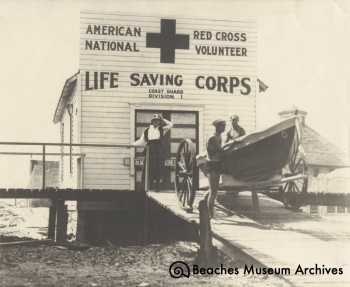 The first building for Station #1 as it looked after 1914. The name of the front of the station was changed to reflect the group’s new identity as the American Red Cross Volunteer Life Saving Corps, Coast Guard Division #1.

The first building, however, was prone to storm damage, even blowing over a couple of times during significant storms in its earliest years before being fixed to a concrete foundation around 1915. While the Corps made frequent repairs over the years, it was ultimately replaced in 1920. Made of concrete block, the second Station #1 housed first-aid rooms, a guard room, locker room, captain’s room, club room, and a dormitory. A few years later, a boat room and a second dormitory were added. This station weathered several hurricanes and served the Corps for almost 25 years.

In its early years, the American Red Cross Volunteer Life Saving Corps had a contingent of women guards. Formed in the late 1920s, they served the beach community for about a decade. Since the mid-1990s, women have been actively recruited to serve alongside their male colleagues as one unified corps. 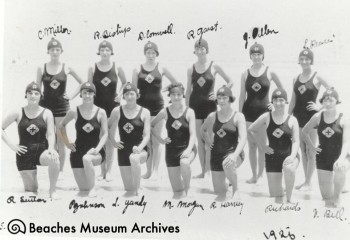 In its early years, the American Red Cross Volunteer Life Saving Corps had a contingent of women guards. Formed in the late 1920s, they served the beach community for about a decade. Since the mid-1990s, women have been actively recruited to serve alongside their male colleagues as one unified corps.

Talks began as early as the late 1930s to either remodel the station or replace the structure entirely. The second station was eventually torn down in December of 1945 and construction began on today’s Station #1 in 1946. Initially, the new station was expected to be built and operational in 1946, but due to problems with financing and materials needed for construction which were in short supply as WWII had only recently ended, construction was delayed for several months. Lifeguards and new recruits operated out of an old army hut on the beachfront throughout construction.

Full operations in the third Station #1 building began in 1948 with several improvements including a new observation tower known as the Peg. The older version of the Peg, similar to the mast and crow’s nest of an old ship, was replaced by a five-story tower connected to the main building. Constructed with the Art Deco style of architecture, the layout of this station is similar in many ways to the one it replaced. 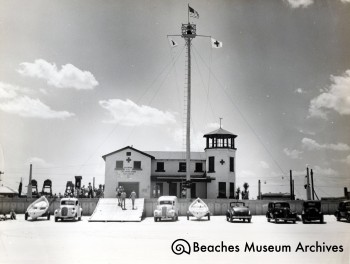 The American Red Cross Volunteer Life Saving Corps remains an iconic and crucial component of Jacksonville Beach and the surrounding area. Station #1 was added to the National Register of Historic Places in 1914 and remains a focal point of Jacksonville Beach to the present day. The distinctive suits and red chairs that pepper the beaches throughout the summer months have remained unchanged for years. The organization continues to provide valuable services to the community including first aid and water safety education. 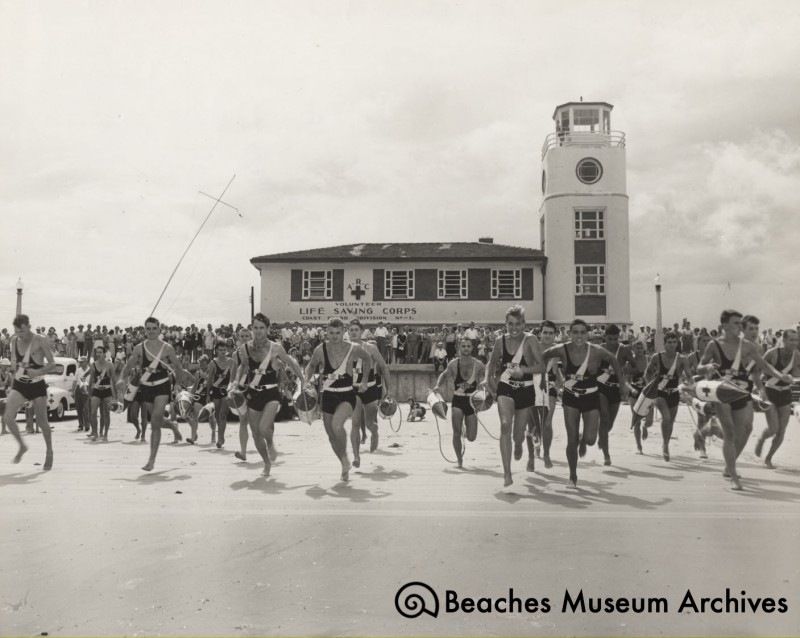 Local lifeguards participating in the annual Meninak Ocean Marathon Swim around 1948 at the newly constructed third incarnation of Station #1. Photo by Virgil Deane. 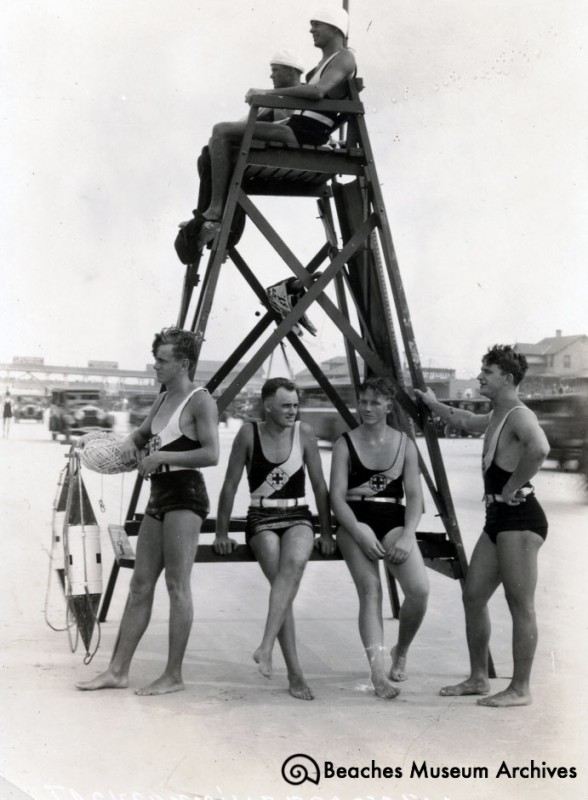 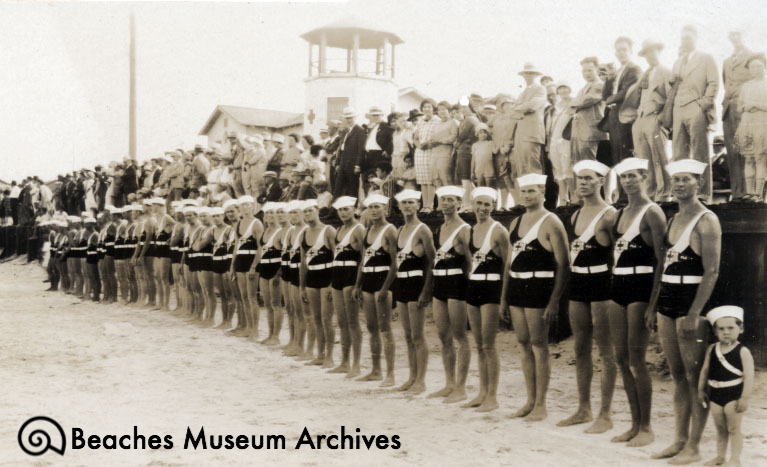 Lifeguards demonstrating drills to spectators in front of Station #1 in Jacksonville Beach in the 1920s.