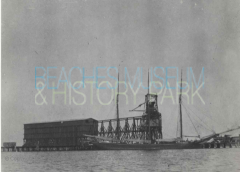 Mayport is French by birth, Spanish by upbringing, but decidedly American with the United States Naval Station Mayport dominating the present day community.

On May 1, 1562, French Admiral Jean Ribault sailed into the Rivère de Mai, later named the St. Johns River, claiming all before him for his motherland, France. From that day forward, Mayport and environs saw several hundred years of power struggle with control alternately being held by France, Spain, England, Spain again and, finally, the United States. 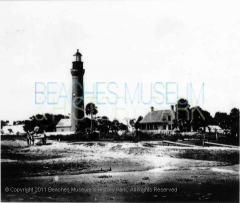 By 1827, with governmental intervention relating to river pilots on the treacherous St. Johns River, the population of the existing fishing community increased, and a lighthouse was constructed.Called Hazzard on early maps and documents, the settlement became known as Mayport Mills, homage to the French naming the river after the month of May.

The following year, the United States acknowledged the land grant awarded by Spain to the Dewees family. In 1841, part of the Dewees Land Grant was sold to David Palmer and Darius Ferris who laid out the plat for modern Mayport. In those days, lumber was king in Mayport Mills and the “white gold” was brought by boat, cart or raft to the mills.

As railroads pushed deeper into the South, the importance of Northeast Florida was recognized. The extension of the Florida East Coast Railway to Mayport in 1900 spurred the growth and economy of the town. Coal powered trains were able to load coal directly from the docks; the old hazardous mouth of the St. Johns River had been tamed by jetties, built by the government, reaching miles into the Atlantic Ocean. Mayport was a two way traveling town: lumber and naval stores were carried away by schooner while settlers, tourists and health seekers were carried in by steamboat.

In 1913 Elizabeth Starke bought a 375-acre estate she called Wonderwood. The estate was later acquired by the federal government to establish a naval station on its site.

When the trains stopped running in 1932, Mayport returned to its roots, fishing and shrimping. The community continues to coexist with US Naval Station Mayport, a military base established prior to World War II and one of the largest and most sophisticated military bases in the world. Today, what was once an historic, picturesque fishing village is giving way to modern development like all the other communities at the beach.